Image or participants at the Climate Emergency in Practice Day

In this case study Fife Contemporary discuss an event they held for artists to discuss how to respond to Climate Emergency, a good example of the role that arts and culture organisations can have in disseminating knowledge and understanding as well as bringing together people to enable necessary discussions to take place.

Fife Contemporary is a St Andrews-based contemporary visual art and craft organisation. Formerly the Crawford Arts Centre, we now work from an office rather than a venue with a remit extending across Fife and beyond. Most of our exhibitions and projects are undertaken with partners.

In October 2019 we hosted an event for artists in the Adam Smith Theatre, Kirkcaldy, looking at ways that artists could become practically involved in addressing the climate emergency.

A major part of our work is supporting artists, and to this end, we have regularly run Continuing Professional Development events on a variety of topics. Initially these were aimed at Fife-based artists, but very quickly we opened them up to anyone who wanted to attend. Our ‘Climate Emergency in Practice’ Day was such an event, attracting attendees from Fife, Tayside, Edinburgh, and Glasgow.

From feedback at earlier events, we felt it was important that in addition to speakers, there would also be plenty of time for audience discussion, sharing of views, and just general networking and meeting of likeminded folk. We had a straightforward format –just an introduction to climate emergency from an artist-host (Jonathan Baxter, who we had worked with previously), and three short talks interspersed by group discussions.

Why a Climate Emergency Day

We have been part of the Green Arts Initiative for some years and last autumn declared Climate Emergency, recognising that time was fast running out for finding solutions to save our planet, its wildlife and biodiversity. We know that many artists try to incorporate an environmental approach into making work, and felt it was highly appropriate to offer a day for discussion.

We put together a to ask if this was something that would be helpful for artists to consider when planning work.  One aim of the day was to find out if there was a need to take its development further. 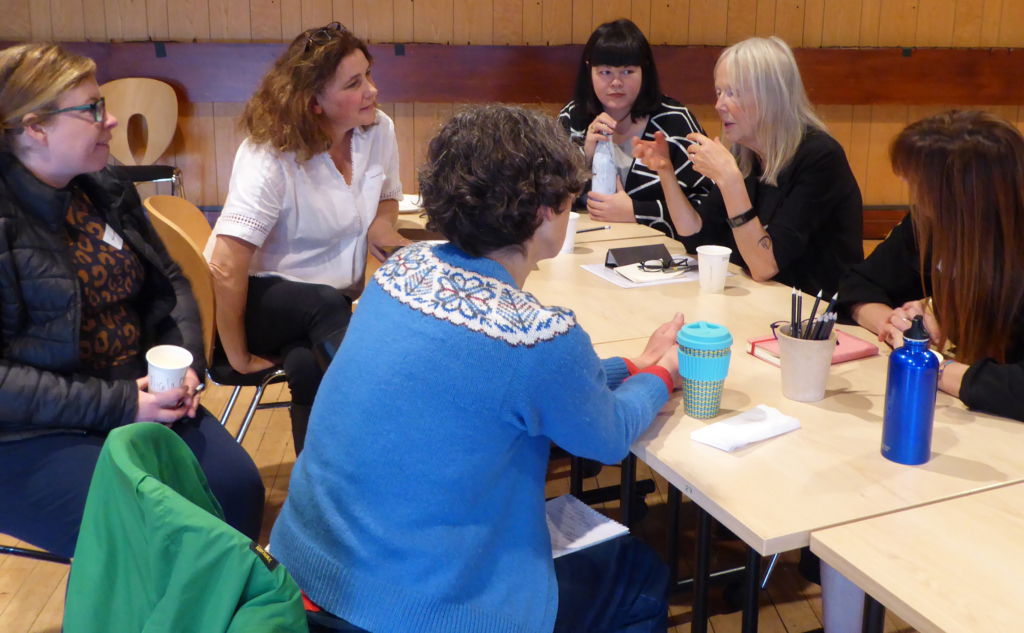 Our small staff team spent several hours considering what we felt to be most important as themes for the day, and honed our options down to:

In the afternoon we were joined by Catriona Patterson from Creative Carbon Scotland to give a short presentation about the organisation.  Finally, we asked artist and climate activist Jonathan Baxter to start the day with a broad introduction to what Climate Emergency meant. He also drew the day to a close with a succinct summing up. 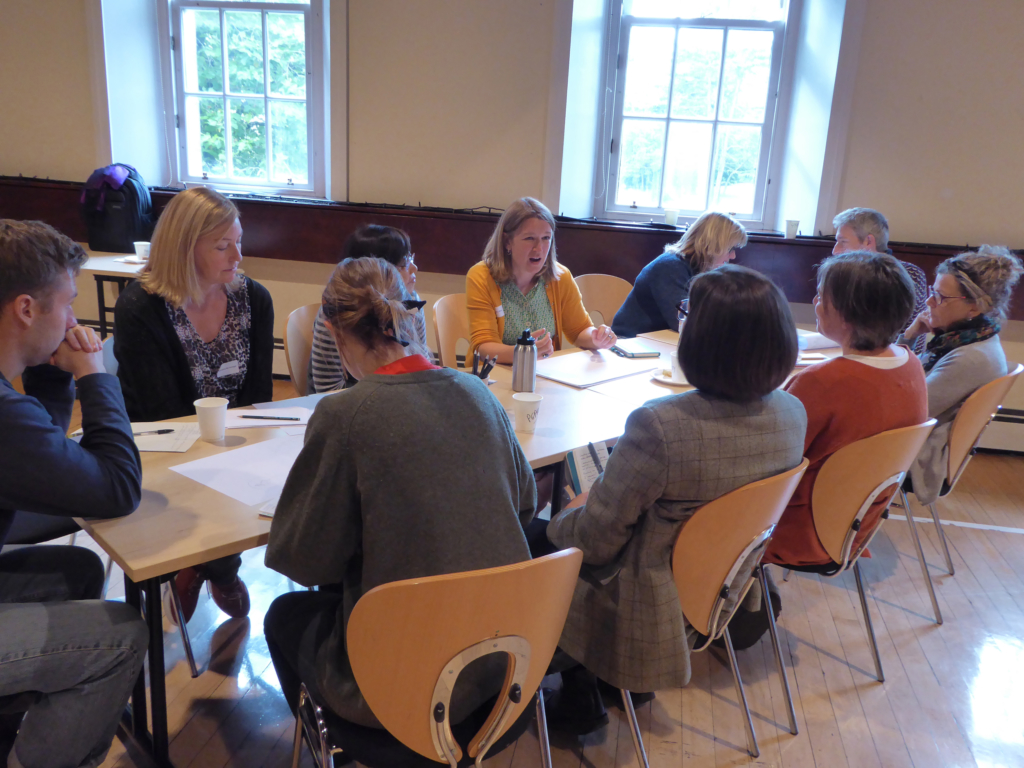 Participants in a group discussion

How could more people be engaged? 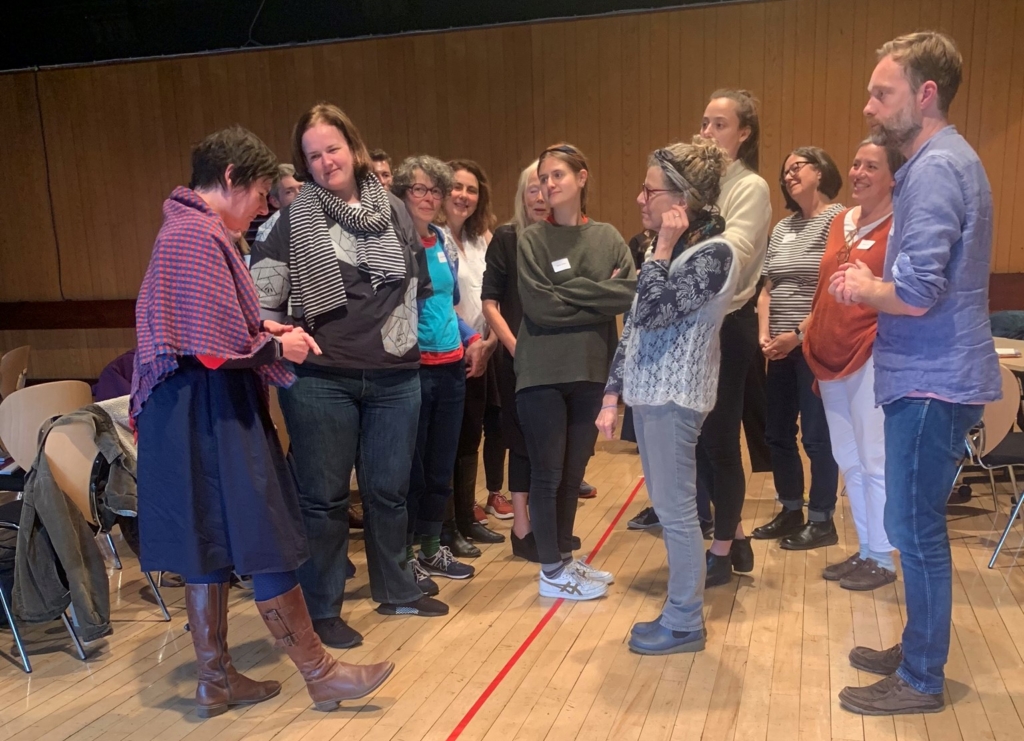 Overall, the day was a great success with 26 attending, but it was also a serious day with little levity. An interesting outcome for us was that it put us in touch with research being undertaken by artist Inge Panneels at Napier University concerning the creation of a to gauge artists’ carbon footprint when producing work.  Inge was able to describe briefly what her research was about and there has since been a further meeting in Edinburgh. We hope to be involved in how this develops in future.

Having declared Climate Emergency last year, we now actively consider how different aspects of our work as an organisation may add to our carbon footprint and amend plans if necessary. We are also shortly to add a section to our website about Climate Emergency and hope it will become a useful resource for artists.

Fife Contemporary are a member of our Green Arts Initiative: a networked community of practice for Scottish cultural organisations committed to reducing their environmental impact. It is free to become part of the community, and there are lots of resources and case studies (like this one!) to support #GreenArts organisations. Take a look at our Green Arts Initiative page for more information. As a sector, it can feel like there is a conflict between the moral imperative... A writer and theatre producer has been tasked with adding creativity into how... Declaration of a Climate and Ecological Emergency

Declaration of a Climate and Ecological Emergency

We pledge to work with and support our community and local and national...