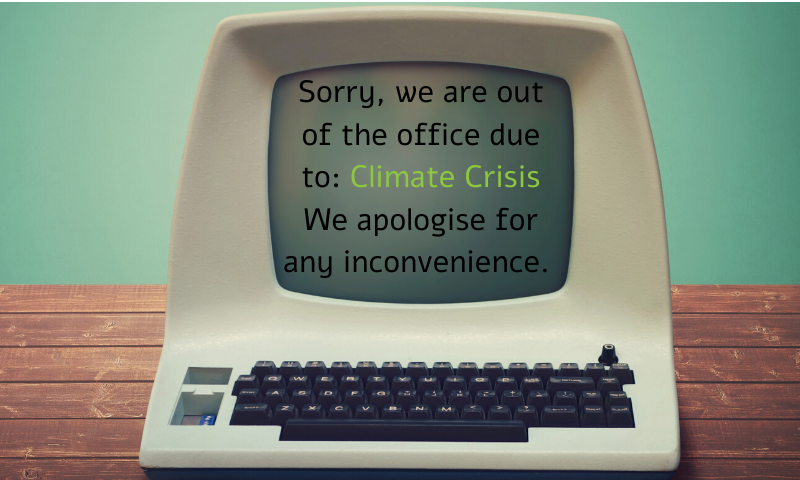 Protesters at the Climate Strike in Edinburgh

The Global Climate Strike on Friday 20 September featured a particularly strong participation from those working in arts and culture. There is a long history of the arts' involvement in social and political issues. But how can cultural organisations publicly take a strong stance on climate change?

As a sector, it can feel like there is a conflict between the moral imperative to engage with climate change through our work, and the challenge of not knowing how to contribute, how best to make an impact, or how not to alienate audiences.

One response can be to focus inwards on our own practices, taking efforts to reduce our carbon footprint and adopt sustainable working methods. This is important, yet there is also great opportunity for the cultural sector to influence society as a whole.

Climate change is not just a scientific issue, but a political one, and as a result it can make arts organisations feel uncomfortable for various reasons:

How things are changing

But with climate change actions such as the Climate Strikes moving into the mainstream, these outlooks seem to be shifting. In recent years, there has been an increased tendency for arts and culture organisations to take a much more active stance in engaging publicly with climate change.

The September 2019 Climate Strikes were a strong example of this, which featured employees of arts organisations clearly demarcating themselves as representatives of that organisation. This included staff from the Tate Galleries, Southbank Centre, National Theatre (who publicly supported the action), and RSNO. This was related to the declaration of climate emergency by the union PCS who said:

The union is calling on all its members’ employers to declare climate emergency – a commitment to become carbon neutral by 2030, to refuse to accept fossil fuel sponsorship, to run green forums, and promote the role of Green Reps in the workplace.

The Scottish Artists Union also voted in favour of participating in the strikes as did the Royal Institute of British Architects and the University and College Union, which represents organisations such as the Glasgow School of Art. Before the strike a letter, signed by representatives of over 150 arts organisations, was circulated encouraging creatives to join the strike.

What others are doing

Some arts organisations have chosen to engage much more closely with social activism. At this year’s Edinburgh Festival Fringe, the venue provider Summerhall collaborated with Extinction Rebellion to curate a series of events during the festival. The information about this residency explicitly states:

The overall aim of the exhibition is to invite visitors to engage with XR’s three demands: to tell the truth about climate change and the ecological emergency; to call on governments to reduce greenhouse gas emissions to net zero by 2025 and to create a Citizens Assembly to oversee the process.

This demonstrates the value of arts organisations collaborating with artists or external organisations, providing them with space and resources to engage with climate change as a political issue while not necessarily acting as representatives of the organisation itself. In other moves, Tate Modern hosted a banner-making workshop for the Climate Strike, which deliberately framed this as an artistic act.

Curating art that engages with environmental issues can also still be presented from a relatively neutral stance. A good example of this could be verbatim theatre, where existing perspectives are presented word-for-word, the only stance coming from how the production contextualises them. Some cultural organisations specialise in presenting work with social or environmental themes. Take One Action Film Festival often includes facilitated discussions with experts following screenings.

Another initiative that has seen a recent rise to popularity is Culture Declares Emergency, a network of individuals and organisations whose declarers include Royal Court Theatre, the Gate Theatre, Somerset House, ArtsAdmin and Creative Carbon Scotland. The initiative states:

We are a growing global community of arts & culture champions declaring a climate & ecological emergency. The crisis compels us to be revolutionaries in our own fields of expertise. It calls for us to imagine new possibilities and to propose systemic change. Let us sow the seeds for creative, individual and collective responses to the emergency.

Culture Declares Emergency creates connections across the sector: from large arts organisations working to improve their own practice, to individual activists who want to make use of the arts as a communicative resource.

Arts organisations are also starting to engage with the complex challenge of sponsorship by fossil fuel extraction companies. This is an issue that has seen increased coverage in recent years, with Tate’s dropping of BP sponsorship following the Liberate Tate campaign and the RSC’s dropping of BP sponsorship following campaigning by BP or not BP and School Strikers. In Scotland, the Edinburgh International Festival and the Edinburgh Science Festival have ceased fossil fuel sponsorship in recent years.

Liberate Tate and BP or not BP have also employed artistic methods in their protests, making use of specially composed music, theatrical performance, and elaborate costumes. They are also largely made up of people working in arts and culture.

What can you do?

The September 2019 Climate Strikes was a demonstration that political engagement with climate change has truly gone mainstream. The question is how we can take this momentum forward as a cultural sector, and find ways of continuing this engagement in our daily work. Macrobert Arts Centre have been an active member of the Green Arts community... The full statement that we’ve signed reads, ‘We do not take any oil, coal,...