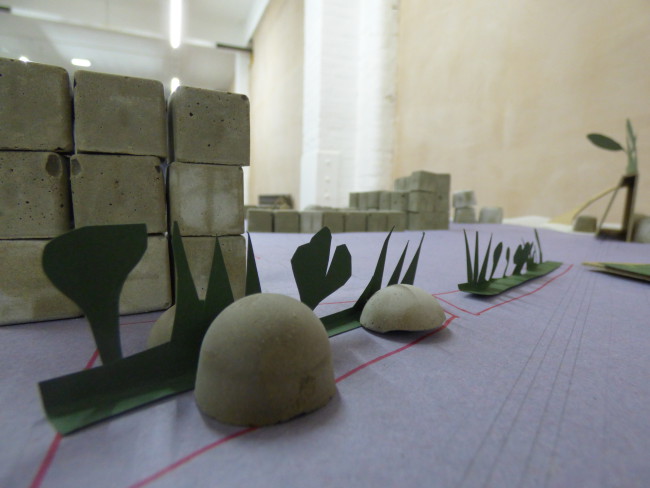 The Green Tease events are a monthly opportunity for people interested in arts, sustainability or both to come together and …

The Green Tease events are a monthly opportunity for people interested in arts, sustainability or both to come together and discuss various ways in which the arts can engage with sustainability issues. This month, both of our Edinburgh and Glasgow events engaged with questions of public spaces and what roles artists can play in different urban contexts.

In Edinburgh we took a barge tour on the union canal from its port in Fountainbridge out to Wester Hailes. Basking in the golden light of the late summer’s evening and cruising along the water, this was the perfect setting to embark upon a discussion about the connections between Edinburgh’s Green spaces and the arts.

Joined by Abby Boultbee of Edinburgh & Lothian Green Spaces Trust, we heard about the 25 year history of the trust and its current work in more deprived areas of the city. Along the way Abby pointed out Hailes Quarry park as an interesting example of place-making through community-focused green space and Gate 55 community centre as a live example of artistic green space development in the south west of the city. Passing around the infrastructural plans for the new outdoor space at Gate 55, the group discussed what roles artists could play in continuing to invigorate and stimulate creative use of the space.

With statistics showing Edinburgh to be a very green city (with 112 parks and 638,000 trees to be exact!) we put it to the group to think about what this means in relation to art and climate change.

In 2011 greenspace scotland produced the report Developing the role of greenspace in climate change mitigation and adaptation which highlighted the need to increase climate change resilience of existing spaces and places. Scottish Government policy recognises the importance of greenspaces and green networks in both climate change mitigation (reducing carbon emissions) and adaptation (adapting to atmospheric changes, which in Scotland’s case means warmer and wetter winters, hotter and drier summers, rising sea levels and more extreme weather.)

Lots of positive examples of urban green spaces that have involved artists/cultural organisations in their design or use were discussed. These included:

New ideas and areas for improvement in the city were suggested, such as a sculpture walk in Edinburgh linking artistic practices and green spaces; walks informed by research at Edinburgh University’s Informatics Department and New Media Scotland; building new creative interest points in parks such as hidden follies and mobile toolboxes or libraries.

Suggestions for support from networks such as CCS and ELGT included nuturing new connections between local communities and artists; building links with relevant university departments and research projects; spreading knowledge about relevant short term projects such may be missed otherwise; compiling lists of relevant people to contact within institutions such as the City Council.

Overall it was a very positive session and it seemed as though a focus on building these new connections would be a useful and interesting direction for the Edinburgh Green Tease network to follow.

Glasgow: ‘A Space for Art’ with Dress for the Weather

We took a not dissimilar approach to Glasgow’s east end with design practice Dress for the Weather, embarking upon an architectural model making session that explored the east end of the city in relation to art and design.

Situated in industrial surroundings of the soon to be opened Glasgow Collective Studios, DfW co-founder Matt McKenna gave us an insight into the variety of art and architectural projects the practice is engaged in with a uniting theme of producing work which engages with and responds strongly to its context. He emphasised their interest in retrofitting, as opposed to demolishing buildings and starting from scratch, exemplified in their Greenock Masterplan project.

In the context of the development of Glasgow’s east end, we were set the task of considering what spaces could be considered as interesting sites for public art which connect with local communities and the existing architectural landscape.

After a recce around the surrounding area, considering accessibility or inaccessibility of particular sites, overgrown or underused green or brown spaces, travel routes in and out of the city, and sites of historical interest such as Glasgow’s original cattle market, we were tasked to propose and model new public art works or installations.

Various ideas were explored including creating a new cycle route which linked to the commercial rail track which passes through the east end; an interactive sound installation that uses electronic oscillators to make music tones, blending with the hum of the local electricity substation; and a living wall and labyrinth garden situated on the busy Gallowgate.

Some interesting questions were also raised about the best ways in which to create such spaces in line with the interests and needs their users, as well as the balancing of spatial, social and environmental qualities of a site; and the brief requirements of the commissioning client.

Once again it was clear that strong links could be made in such contexts with the increasing need for urban planners as well as local communities to consider the functions of public spaces in relation to climate change.

Find out more about our monthly Green Tease events here!