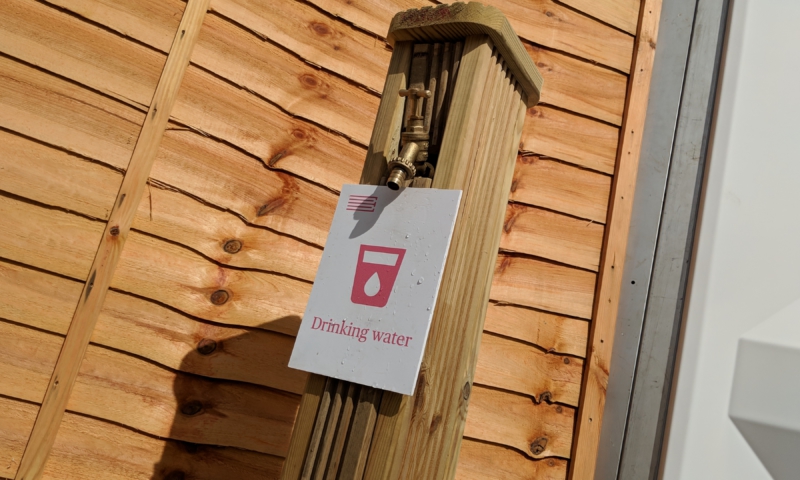 Our Digital Communications Officer, Mike Elm, looks back at how sustainability was right across the festivals in Edinburgh this August.

What was your highlight of the Edinburgh festivals this August?

For me it was the signs that sustainability – which the festivals have been doing to a greater or lesser extent even before they helped found the Green Arts Initiative – is growing in the minds of the organisers and participants at the festivals! (Ok there was also some really good and interesting theatre, comedy, visual art, magic (did you see how it was a common theme this year? What’s up with that?), spoken word, dance and even some clowning)

One of the breakout ‘acts’ of this year’s Edinburgh Festival Fringe was the Sustainable Fringe campaign, which Creative Carbon Scotland has been promoting as a concept for a number of years but was this year led by members of the Poltergeist Theatre group who were up running a show of their own. It offered a great example of how the sector is taking on looking at its impact and using its reach to inspire others to take action on theirs.

“Over the month, the Sustainable Fringe campaign rallied over 100 production companies and individuals on twitter around three challenges – to reduce plastic, paper and material waste. The support from performers, press and Green Arts groups shows that not only are many people ready for a greener festival, but they are prepared to make changes that are vital for the transition.”

The campaign got coverage from the local: The Student Newspaper, to the national: Sky News! It also attracted praise from prominent voices in the sustainability world – Keep Scotland Beautiful, Terry A’hearn the CEO of SEPA – and the arts world – renowned theatre critic Lyn Gardner.

Now everyone knows, a review can make or break your time at the Edinburgh Festivals and they don’t come much impact-ier than Lyn Gardner. She wrote in her new column for The Stage about the environmental issues facing the festivals, but also warmly about the solutions such as the Sustainable Fringe campaign and the Fringe Swap Shop, run by Fringe Central 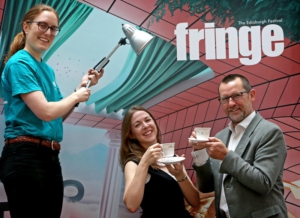 The Fringe Swap Shop also caught the eye of the national body for waste reduction, Zero Waste Scotland. Iain Gulland, the Zero Waste Scotland Chief Executive, came down himself to check out the weird and wonderful items that had been brought to be used again. He praised the initiative saying:

“Edinburgh Festivals are leading the way in making better use of our resources – with exciting projects like the re-use swap shop.”

And we’re reliably told that the story even popped up in the Metro! To continue building on this work the festivals will be taking part in a Circular Economy workshop later this year with Circular Edinburgh to identify opportunities and develop a business case for developing a circular economy approach within the festivals – maximising re-use and recycling opportunities across the events.

Though only one is called ‘The Edinburgh International Festival’, they’re all international in reach and appeal. This year at the Fringe World Congress, our Director Ben Twist and Catriona Patterson (in her Festivals Edinburgh role) spoke at a session on environmental sustainability and festivals that was being held at the Congress. Delegates from Fringes from Amsterdam, Orlando and Adelaide were among those who participated in the session, demonstrating there’s a leadership role for what we’re doing in Scotland.

The international interest in the intersection of arts & sustainability was further demonstrated by our Director meeting with delegates on the British Council’s “Momentum” programme including representatives from Canada’s cultural sector and Washington D.C.’s Chief Resilience Officer.

The Edinburgh International Festival took the opportunity of allowing our Catriona (in her Green Arts Manager role) to write an excellent blog linking one of their flagship shows – Waiting for Godot – with the role of the arts in tackling climate change, and why it’s no time for waiting! The blog highlighted some of the International Festival’s sustainability work including embedding sustainability in all their staff training.

The Edinburgh International Book Festival are certainly well read when it comes to sustainability and this year, alongside having drinking water taps everywhere, creating an excellent bike lane to maintain active travel access along George Street, they also allowed their Green Team to tell their story on Instagram.

Others were more modest. Low-key sustainability leaders Assembly, were also keeping the support for active travel with their bike lane around the George Street , recycling like it mattered to their lives (though somewhat discretely) and using not one but two (at least) “lifesaver” electric cargo bikes from the Sustrans Bike Library to ferry all sorts of equipment and supplies around town.

And this year also saw the return, or the continuation, of the Bobby Niven’s Palm House in the Scottish Wildlife Trust’s Johnston Terrace wildlife garden as part of the Edinburgh Art Festival. This year alongside bringing people into this beautiful green space in its own right and to sample pizzas from the oven, it also played host to magic. Marxist magic. Ruth Ewan’s “Sympathetic Magick” commission for the Art Festival saw magicians work-shopping and performing on how magic tricks can integrate social issues close to the magician’s heart.

A time for  magic.

The summer festivals in Edinburgh are magic. They’re a unique (and sometimes wild!) point of mixing and experimentation in the world’s cultural calendar and so it’s only right that there should be some fantastic work going on across them to support environmental sustainability. There’s clearly an appetite for this and room to do more.

This year the Edinburgh Festival Fringe, the biggest arts festival in the world, have put out the call in “The Fringe Blueprint”  for collaborators to help them innovate and lead on sustainability and also released a new Sustainability Toolkits for Venues and a Sustainability toolkit for performing companies.

It was an undoubtedly excellent summer of festivals (is there any other kind) and we’re looking forward to seeing how this world-leading collection of cultural events can continue to develop as pioneers in environmental sustainability.