Home / News / Guest blog: The Fifth Giant (or What Would You Do?)

Guest blog: The Fifth Giant (or What Would You Do?) 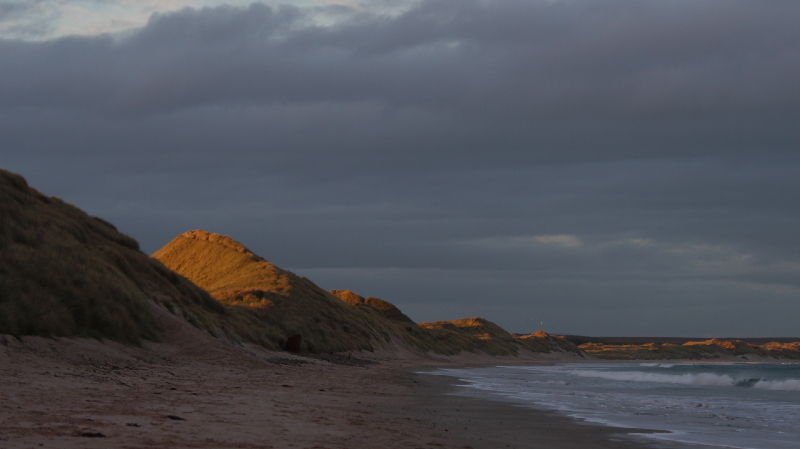 A still from 'The Fifth Giant (or What Would You Do?)', a film by Regina Mosch

In 2021, Lyth Arts Centre (LAC), in collaboration with Timespan and the Environmental Research Institute (University of Highlands & Islands), were selected as a Creative Carbon Scotland Climate Beacon for a collaborative engagement programme around the UN Climate Change Conference (COP26).

Titled The Land for Those That Work It, our Climate Beacon seeks to explore issues of land justice, climate colonialism and development policies and initiatives for our region.

As part of The Land for Those That Work It, LAC commissioned The Bare Project to create a room of The People’s Palace of Possibility in collaboration with the Centre for the Understanding of Sustainable Prosperity (University of Glasgow) here in Caithness. This residency is the subject of this blog.

The People’s Palace of Possibility is a long-term project that creates spaces for people to imagine other ways of living through stories, conversation, and play. It is a place to ask how things could be different, fairer. The Bare Project creates frameworks for crunchy conversations to happen through potlucks, storytelling, and playful, beautiful design. Right now, they are building The People’s Palace of Possibility room by room through a series of residencies across the UK. Each room examines a different theme. Eventually, all these rooms will be gathered together in one big, utopian outdoor installation.

With LAC, The Bare Project began to build the first room of the Palace. The theme of this room is human relationships with land. Before building the Palace, we must examine our relationship with the lands on which it will sit. Over two weeks in November, whilst COP26 took place in Glasgow, The Bare Project met with crofters, young people, community foresters, growers, academics, and artists to begin to unpick human relationships with land in Caithness. What are these relationships? And how are they shaped? Through what lenses and languages do we understand and interact with the land around us?

The team initially expected a good amount of this residency to be focussed on the Gaelic and Scots languages of the Highlands – whilst this was mentioned, it was not a focus for many collaborators. Instead, the team quickly found that ownership was a crucial component of people’s relationship with land in Caithness, and that the history of clearances, and the contemporary rewilding agenda, were close to the surface in people’s thinking about the land around them. Another major theme was around energy production. Caithness hosts the Dounreay Nuclear Powerplant – indeed, this is one of the biggest employers in the region. The county is also covered with wind turbines, with which local communities have a mixed relationship. Across the first week of their residency, all of this complexity filled up the team’s time and conversations – making them acutely aware of how insufficient a two-week residency was to try and say anything new or meaningful about the human relationships with land in Caithness. 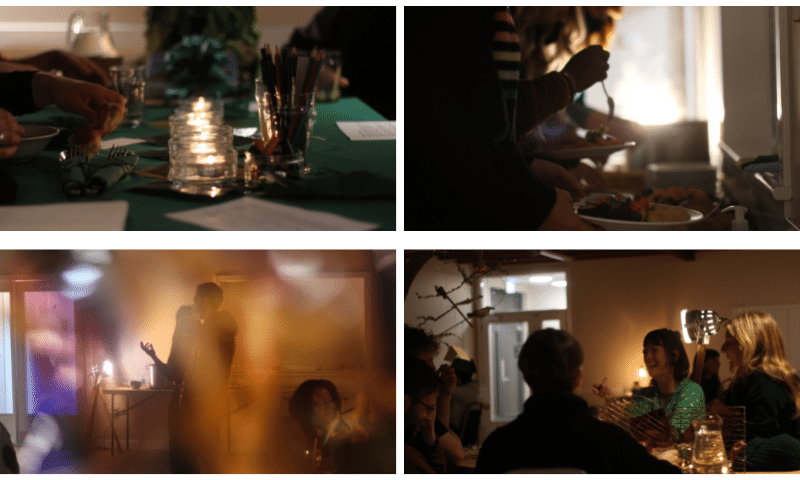 A collage of four stills from the film ‘The Fifth Giant’ by Regina Mosch showing a dinner party by candlelight; the table, someone eating, and people chatting.

The Bare Project are primarily a performance company, so their routes into these crunchy questions is through stories. Enter the giants. Giants in Scottish folklore are often the forces that shape the land around them – they scoop up earth and form lochs, they fall asleep and mountain ranges appear. So, with this in mind, the team questioned who the giants of today’s Caithness would be. Quickly, roughly, The Bare Project sketched out four giants based on our conversations with local people. These giants loosely and poetically represented the big estates and their landlords, the energy companies, well-intentioned land projects (such as rewilding projects), and finally, the giant’s giant who encompassed the wind, the rain, the ocean, the salt, and the soil. They then used these characters to create new mythologies about the lands of Caithness at a big final feasting and storytelling event in Reiss Village Hall. Profiles of these giants have been woven into a film about this brief residency. These characters are starting points, and this residency became a testing ground for whether this approach to thinking about land is fruitful: artistically and politically. We know that stories can help us lose ourselves a bit, to open a realm of possibilities and magic. And from this space, perhaps we are better able to look at the world around us – and to reimagine more reciprocal and respectful relationships with the land upon which we depend.

Acknowledging these giants and naming them, did at times feel scary; Grinshunk, Varnaclay and the other marauding giants were a personification of the massive challenges we face, the huge task we have to take on and a reminder of how small and insignificant we can feel as individuals in this duty. However, what The Bare Project did so well was to ensure a sense of community throughout their residency. Their gentle invitation to the final sharing meal was a reminder of how strong we can be together. The phrase ‘standing on the shoulders of giants’ has long been part of the English language, a metaphor and reminder for us to use the understanding of those who have gone before us to make better informed decisions for the future. Too often we think these giants are the great philosophers and thinkers, leaders and governments, but through The People’s Palace we have learnt that these giants instead lie in our communities. That we become massive when we connect with each other – rather than feeling like we have to be individual David’s fighting multiple Goliaths. Whether it is through engaging with indigenous knowledge and practices (such as peatland restoration and the return of ancient grazing practices), or community land buy-outs (like the Dunnet Community Forest), we find our giant’s power in these acts of solidarity.

This short film is an account of The Bare Project’s time at Lyth Arts Centre in Caithness (also known as The Flow Country) and offers the sketched beginnings of the giants they discovered in their time there. The film was created through a collaboration between filmmaker Regina Mosch, artist/researcher Malaika Cunningham, and sound designer/composer Lee Affen.

Film by Regina Mosch (with audio and composition by Lee Affen)

This guest blog was posted by Lyth Arts Centre, a partner organisation in our Caithness and East Sutherland Climate Beacon. Creative Carbon Scotland is committed to being a resource for the arts & sustainability community and we invite you to submit news, blogs, opportunities and your upcoming events. Argyll Beacon In Argyll, Cove Park and ACT have announced a whole series of...

Seven hubs known as ‘Climate Beacons’ were announced today and will take...