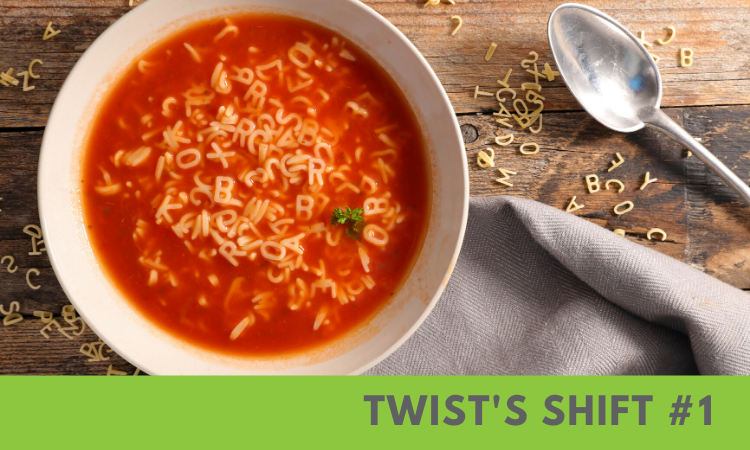 Twist’s Shift is a new strand of semi-blog, less formal and structured than Ben's Strategy Blogs, more a rag-bag of thoughts and experiences from the last wee while.

Those of you who subscribed to the Twist List in the past may recognise the style. This is the first edition, as it were, and we’ll see how it develops. I’ll try to make sure there is something each time for readers from both the arts/cultural end of things and the climate change side, and it perhaps aims to bring these ‘two cultures’ together on an irregular basis.

I seem to have been giving lots of talks and facilitating events while in lockdown – online, obviously, which has been interesting. At Creative Carbon Scotland we have noticed that meetups for our Green Arts Initiative (for people in cultural organisations) and Green Teases (for people from both the cultural and climate change worlds, to facilitate collaboration and new connections) have been attracting more people and from further afield than our in-the-flesh ones. This is true also of other organisations’ events that I have been involved in.

I chaired a Public Sector Client Forum event about Designing for a Changing Climate for Architecture & Design Scotland – videos and resources available via the link. Normally these would attract an audience of 40-50 people, but A&DS had over 130 attendees from all over the country and it was a terrific discussion. It brought together unlikely pairings such as Dr Alette Willis, a storyteller and academic who argues that ‘we live in a soup of stories’, which help us shape our lives, how we think and behave, with Clive Bowman, the Circular Economy Manager from Zero Waste Scotland. I’d imagined he’d want to talk about re-using materials in the context of the built environment, but he took the opportunity that Alette’s angle presented to focus on the values behind the very concept of a circular economy. We had a great conversation, with lots of input from the audience.

Alette Willis turned up at an equally well attended Cross Party Group on Culture to which I contributed at the Scottish Parliament (or rather, not there at all). I had based my talk around Alette’s ‘soup of stories’, so I was a bit nervous to see her in the virtual audience (luckily she was happy with my use of her idea!). My argument was that if we’re going to transition to a fairer, better, zero-carbon future that is adapted to a changed climate, we need to live by different stories to those we live by today. And, if you consider the counterfactual, that is going to be very difficult if the cultural institutions and outputs that help shape our stories are promulgating high-consumption, me-focused lifestyles that promote inequality and imply high carbon emissions. By way of examples I pointed of course to Hollywood, which churns out stories set within very high-carbon lifestyles; but also to a great chunk of Scottish cultural output that has, in the past at least, set great store by Scotland’s history of coal mining, shipbuilding and heavy, carbon-intensive industry. We need to find new stories that shape a different sort of ambition and future and that don’t laud those who live by carbon. Kit England from Climate Ready Clyde also contributed, talking about our collaboration with that group, which is working on adaptation for the whole of the Clyde basin. Generally, the discussion was very strong, although the shadow of the effect of the lockdown on the cultural sector hung over things.

More recently I had a long conversation with the theatre critic and general political/cultural commentator Joyce McMillan, which led to this article, which (as with all of Joyce’s writing) is well worth a read. It brings together some topics I have been thinking about and working on for some time – making me sound much more articulate than I was on the phone!

The internationalisation of the arts

Just before the lockdown I filmed a talk about the internationalisation of the arts for a conference of dance artists, funders and others taking place in Lisbon. In my talk I asked the audience to think about internationalisation in terms of globalisation and what that has meant for the arts and artists. Like manufacturers, globalisation and the development of very cheap travel since the 1970s, and particularly perhaps the increasing role of the EU, have meant that arts organisations and artists can and do sell their services abroad, and they buy in services (shows and talent) from abroad (dance companies are particularly multi-national, perhaps because language isn’t a barrier). Similarly, audiences can travel easily to see work and have come to expect an at-home diet of international companies performing. But globalisation, as the UK’s manufacturing sector has learned, has its downside: the artists and companies are in competition with artists and companies from abroad, some of whom may have lower costs making them cheaper, or may simply seem more attractive to promoters and audiences because they are from elsewhere. Audience members may hop on a flight to foreign parts to see a show with a city-break thrown in, so depriving their local theatre of their company.

In fact, the Portugal conference was postponed until December because of the pandemic, which of course has highlighted the fragility of our international supply chains when it comes to PPE and ventilators, but also perhaps in terms of artists who might be locked down at home, even if promoters and audiences could welcome them here. And conversely it has highlighted for producers the risk of relying on international touring, projects or teaching to fill a festival programme or balance the books.

More recently I held a workshop with a group of dance artists and companies from Scotland to discuss international working. Some echoed a comment I had heard previously from theatre companies, that they need to do international touring for financial reasons as much as artistic or social ones. And they agreed with some musicians I have spoken to that they, and their artists, were increasingly unwilling to travel internationally for short engagements: to fly to Colombia for two performances, or even to Germany for one.

This applies not just to the arts but to academia, business and others. Of course, COVID-19 has taught us to Zoom about and there is much talk of a reduction in business travel. This has its pros and cons. I asked the Scottish dance people to think about how international working breeds inequality; people with caring responsibilities – primarily women – are much less able to travel and so could miss out on career opportunities; people with disabilities are likely to find fast travel to unfamiliar places much harder than those without them. And as Joyce’s article mentions, for me the communal thinking that theatre provides is an important part of society working out how to address difficult and complex questions at the same time as building local communities. Maybe academic conferences and certain sorts of business meetings do the same and I don’t think we’ve yet learned how to think together across the net – I’m not sure it’s actually possible without holding your breath to hear the next devastating line that you know is coming, or laughing with your neighbour at the joke you’ve both just seen and heard.

Finally, earlier on in the lockdown I found myself strangely drawn to re-read Kazuo Ishiguro’s novel The Buried Giant, a book I found unlikely but good when I first read it back in 2015. On the surface it’s an Arthurian tale of knights and dragons and, importantly, a strange mist that seems to make everyone lose their memory of the past. This feels like a bad thing but it turns out to be more complex than that: not everyone is quite what they seem.

I returned to it and I became convinced the book, written in what we didn’t know then was the run up to the Brexit referendum and not long after the Scottish independence referendum, has important things to say about the importance of both remembering and forgetting. We may need to forget some of the battles that have been fought that have divided us and the damage that has been done, we may also need to remember why we fought those battles and why the hurts were caused, possibly in order to forgive them. And we may need to remember what past times were like so we can avoid them in future. As the pandemic has maybe given us an insight into what past lives were like, as the current UK government is (mis-)using myths about the Second World War to achieve its pernicious aims, and as climate change is making us re-examine our present practices, The Buried Giant suddenly seemed to become an important and useful book. I’d encourage you to read it – it isn’t really an Arthurian tale at all.