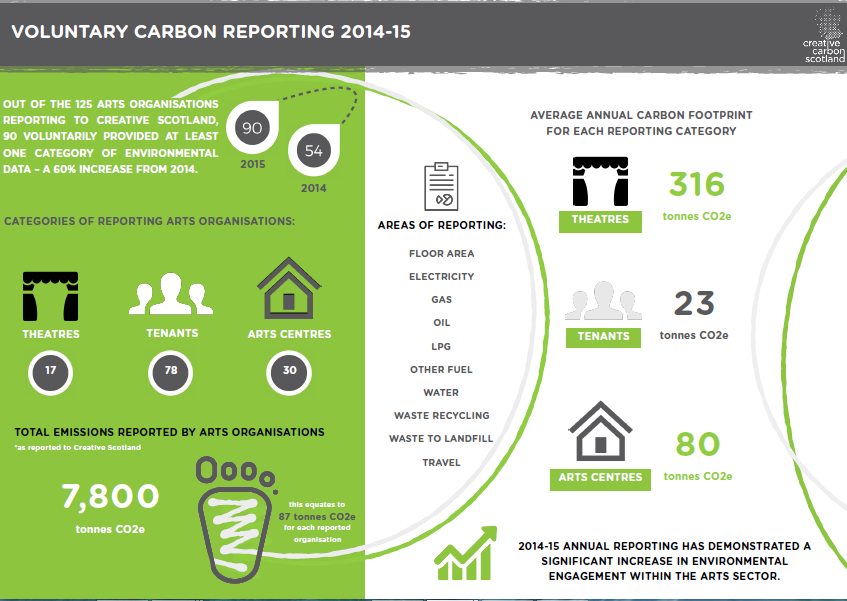 During our conversations with arts organisations, we have often been asked what are the best ways to reduce carbon footprints and how do we know whether we are doing well?

In this report, we’ve tried to answer some of those questions by analysing the environmental data provided last year as part of annual reports to Creative Scotland.

We were delighted to find that many more organisations had included information on environmental data as part of their annual reports with the number increasing from just over 50 last year to 90 this year. For many this was the first time they had attempted to collect the data and in a lot of cases the data were estimated but on the whole the Green Champions, who were largely responsible for the data collection and reporting, found the process much easier than expected. You can find out more about the process involved in our Carbon Reporting pages.

Although very few organisations were able to provide complete information as requested on water, fuel waste and travel we were able to see some trends emerging which will help us build up a picture of the carbon impact of the arts in Scotland. Find out more on what data should be recorded in our Guidance for Carbon Reporting

Many organisations have requested information on how much fuel and water they should expect to use. To provide this and to allow a comparison with industry standards, rudimentary baselines and metrics have been calculated to provide an indication of the performance of the organisations which provided utilities data.

We found that although theatres and arts centres have a much larger carbon footprint overall, when looked at in terms of floor area, there was less of a difference. For each
utility, the values were broadly similar between all three groups:

We compared these values with information contained in a recent report issued by Julie’s Bicycle. Although the sectors were defined differently, the calculated metrics for gas and electricity were roughly in line with the values reported by both CIBSE and Julie’s Bicycle for performing arts venues: