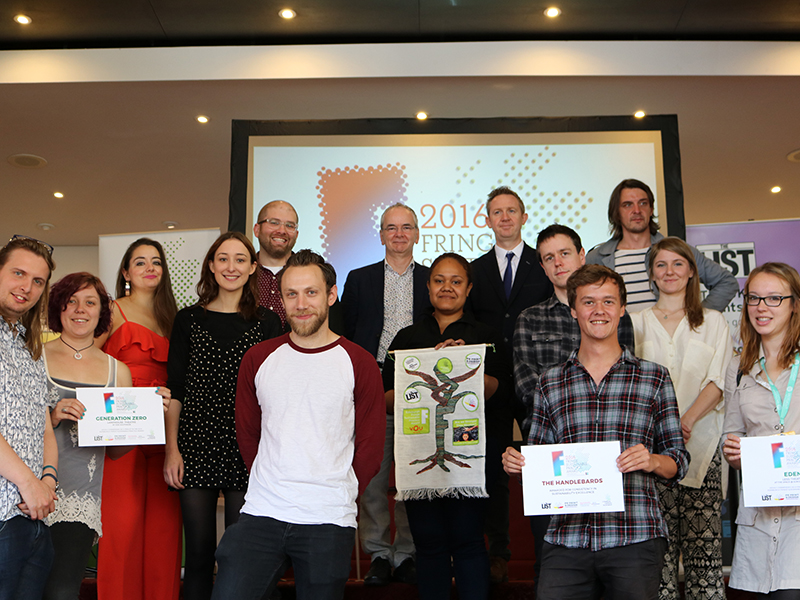 The 2016 EFSPA was announced by the Center for Sustainable Practice In the Arts and Creative Carbon Scotland at a ceremony at the Festival Theatre on Friday August 26th.

The award, celebrating sustainable design, content and production at the Edinburgh Festival Fringe, was given to VOU Fiji Dance for their production Are We Stronger Than Winston?, performed at Greenside @ Nicolson Square.

A representative of the company received the award piece, created by local maker Coral Mallow, and presented by comedian Holly Burn, who hosted the event. Other speakers included Brendan Miles from the List magazine, Ian Garrett from the Center for Sustainable Practice in the Arts and Phil Brady from PR Print and Design.

Are We Stronger Than Winston?  was created in response to the cyclone Winston, which devastated the South Pacific Islands in February this year. The dance piece depicts the horrors of the natural disaster, as well as the locals’ resilience in dealing with the strongly-felt impacts of climate change. They convinced the judges with this direct approach to the theme of sustainability in its form of human adaptation to a changing environment, as well as their excellent and moving performance. Moreover, they are conscious of their carbon emissions through travel and aimed to offset this by planting trees in their homeland. The company concluded their spring European Tour with the Edinburgh Festival Fringe run, appearing at Greenside @ Nicolson Square from August 5th to August 13th. In the company’s words: 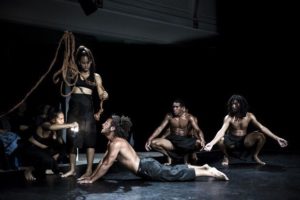 ‘Fiji is my home, my land… my interconnected relationship of unconditional love and protection. But my land is disappearing. When it is gone, I am gone. But I refuse to die; I will fight! I am reclaiming ownership of my existence – as a people and a land. Fighting to save the land of my birth!’

VOU Fiji Dance emerged as the winner from a highly competitive field. With more applications than ever before, the judges agreed to shortlist 24 productions and choose 7 finalists. This unusually large selection reflected the high quality of the productions as well as their scope across all areas of sustainability. Judges assessed shows based on their artistic quality, their engagement with themes relating to social, economic and environmental sustainability, and their thoughtfulness around decisions relating to sustainable practice.

The full shortlist can be found here.

The other shows making it to the finalist stage were revealed at the ceremony to be (in alphabetical order):

For expressing the fragility of life in a dangerous environment through consistently expressive physical movement, sound and high production values. Engages by provoking questions rather than providing answers.

For its intentional and considered use of found objects in a way that transforms them into magical characters and for making a strong connection with the environment and waste as exhibited in material choices.

For its exploration of a future where climate change has restricted our travel and lives, and the emotional impact of such a societal shift. A production where the ramifications of living unsustainably were at the heart of the plot.

For using delightful and inventive upcycled puppetry to explore the human role in nature, and the importance of harmony in the world. It created an approachable context for children to understand the cycles of nature, and our need for it.

For a purely executed, uncompromising look at human transience and how that manifests in the unsustainability of our built world.

For their continued excellenve and ambition both concerning artistic vision and sustainable practice of the company itself. Having won the award in 2014 and being shortlisted several times, they received a special commendation for their continued achievements.

Each year the award is given to a production that exhibits high quality artistic integrity and engages the company and audiences with the issues of sustainability in all of its forms. It celebrates different approaches to sustainable practice both in content and in the production of shows, and rewards those that take responsibility for their social, environmental and economic impacts and think creatively about how the arts can help grow a sustainable world.

The award for Sustainable Practice at the Fringe was first launched in 2010 Previous recipients include:  The Pantry Shelf , produced by Team M&M at Sweet Grassmarket; Allotment, produced by nutshell productions at the Inverleith Allotments in co-production with Assembly; The Man Who Planted Trees, produced by the Edinburgh’s Puppet State Theatre; How to Occupy an Oil Rig, by Daniel Bye and Company, produced by Northern Stage; The Handlebards: A Comedy of Errors/Macbeth, produced by Peculius at the Royal Botanic Gardens Edinburgh and Lungs, by Paines Plough at Roundabout at Summerhall.

The Edinburgh Fringe Sustainable Practice Award is a collaboration between its founder, the Center for Sustainable Practice in the Arts (CSPA), and Creative Carbon Scotland (CCS), working together with media partner the List magazine and sponsor PR Print & Design, supported by the Arts & Business Scotland’s New Arts Sponsorship Grants programme.

Ian Garrett and Miranda Wright founded the CSPA in early 2008. The organisation provides a network of resources to arts organizations, which enables them to be ecologically and economically sustainable while maintaining artistic excellence. Past and Present partnerships have included the University of Oregon, Ashden Directory, Arcola Theatre, Diverseworks Artspace, Indy Convergence, York University, LA Stage Alliance and others.