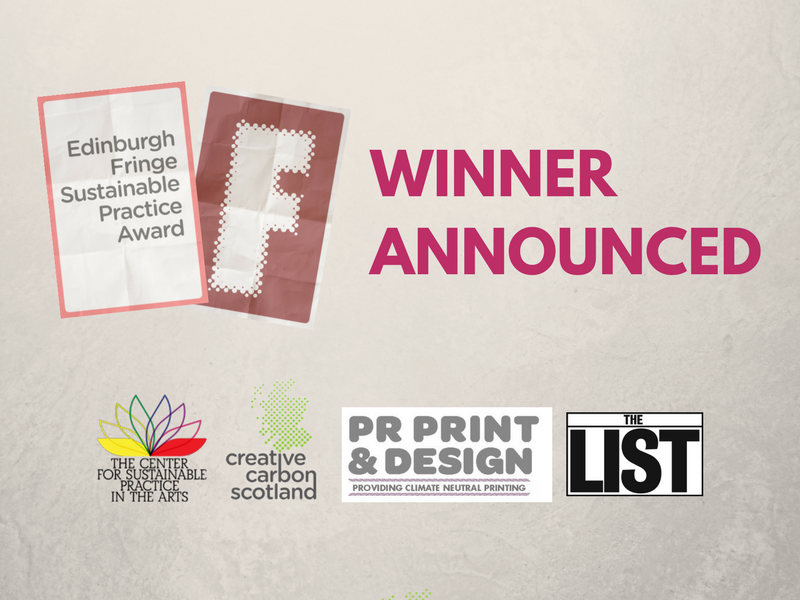 Poet Harry Giles presented the winners, Outland Theatre with the award for their 2017 production at the Edinburgh Festival Fringe, Towers of Eden. Founders of the company, Simon Christian and Melissa Dalton received a hand-crafted piece from Glasgow based designer, Chris Wallace, which was made with reclaimed copper wire and reclaimed roof slate. Ceremony attendees included Fringe participants and others from the Scottish and international cultural and sustainability worlds.

With applications open to all 3,398 shows performing at this year’s Fringe, a high number and quality of applications were received, and whittled down to 18 shortlisted productions, 5 finalists and one overall winner. Judges assessed shows based on their artistic quality as well as their engagement with themes relating to social, economic and environmental sustainability, and sustainable practices they adhered to. This year there were many unique ideas and concepts which engaged audiences, both young and old. 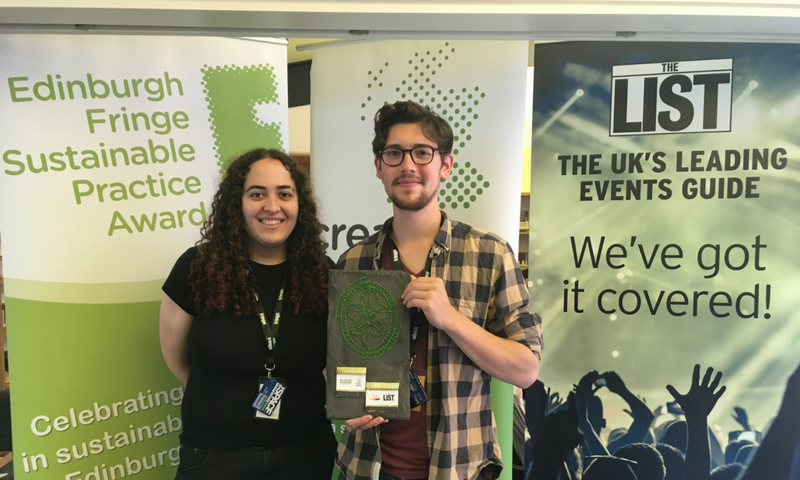 The award winner, Outland Theatre’s production of Towers of Eden, portrays a dystopian future where environmental disaster has struck, traditional agriculture is no longer sufficient to feed the ever-growing population and the government offers a solution which becomes corrupt. They convinced judges with their unique concept and gripping theatrics which accurately conveyed their sustainable messages. Moreover, they were conscious of the sustainability of their production by considering the carbon footprint of their show, including the impact of their marketing, travel options and sustainable engagement through a crowd funding initiative to support their trip to Edinburgh.

Ben Twist, Director of Creative Carbon Scotland, said:
“The award recognises the very best in sustainable practice at the world’s largest arts festival, and we hope that it will encourage future performers, producers and venues to consider social, economic and environmental best practice in the future. We’re delighted to be able to present this award, and are enormously grateful to our partners the Center for Sustainable Practice in the Arts, PR Print and Design, and The List to enable this to happen.”

Four other finalists were also recognised at the ceremony for their significant contribution to sustainable practice at the Edinburgh Festival Fringe. These were:
• Home Sweet Garden by Asylon Theatre at Royal Botanic Garden Edinburgh – John Hope Gateway
• Last Resort by 2 Magpies Theatre at Summerhall
• Me and My Bee by This Egg and the Pleasance at Pleasance Courtyard
• Tribe by Temper Theatre at Zoo Southside